“Our Way of Life is Forever Disrupted”: A Conversation with Benjamin Nuvamsa on the Theft of the Talaotumsim 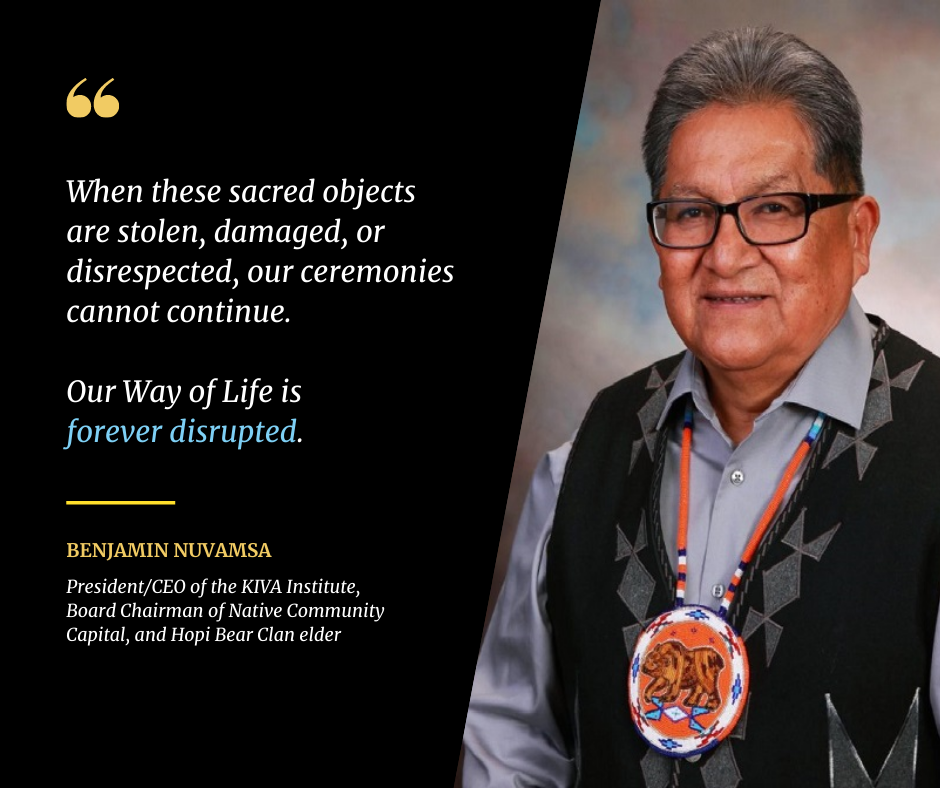 When it comes to being a Bear Clan elder, Ben Nuvamsa (Hopi) emphasizes duties and obligations over rights and benefits. Being born into the Hopi Bear Clan brings with it hereditary responsibilities to look out for the good of your children, the Hopi Sinom (people), and people around the world. Ben spent his career as a public servant, including 35 years (1971–2005) working in the U.S. Forest Service and Bureau of Indian Affairs, where he was superintendent of the Fort Apache Agency and leader of the team responsible for the development of the regulations for P.L. 93-638, the Indian Self-Determination and Education Assistance Act. After retiring from federal service Ben was inaugurated as Hopi Tribal Chairman in 2007. His service continues as President/CEO of the KIVA Institute, a training and consulting company, and as board chairman of the Native Community Capital, a Native Community Development Financial Institution (CDFi).  Native Community Capital exists to assist Native tribes and people with financial resources to meet their needs for housing, community programming, and enterprises.

JRW: What is your definition of archaeological resource crime (ARC)?

BHN: To me archaeological resource crime is part of a bigger pattern of disrespect to culture and history. It’s social and spiritual at least as much as it’s physical or mechanical. Here are some examples of the horrible damage I’ve seen:

JRW: Has ARC impacted Hopi differently from other tribes?

BHN: Our tribe, Hopi Tribe, is among the tribes most vulnerable to ARC. Our culture, ceremonies, and Way of Life all depend on connections to our sacred places and ancestral homes and items. We, Hopit (Hopi plural) observe our traditions throughout the year. We acknowledge the legacies of our ancestors, our sacred objects, and the beings or spirits that surround us. We pay homage to our sacred sites in our ceremonies and in our travels to and prayers through these places. We have altars and ceremonial objects that play critical roles in our rituals. Without them, our ceremonies are not complete. When these sacred objects are stolen, damaged, or disrespected, our ceremonies cannot continue. Our Way of Life is forever disrupted.

JRW: Can you give us an example of how ARC has social or spiritual consequences?

BHN: For me this is so important that it’s better for the example to come from a professional reporter. Here are some excerpts from an article in The Seattle Times (“Theft of Sacred Items Damages Hopi Way of Life,” August 5, 1990), written by Mark Macdonald, that documents loss of essential ceremonial objects and its consequences:

[L]ooters, the thieves of time, have done tremendous harm, coming to the reservation with police scanners, helicopters, and backhoes to steal artifacts from the ancient ruins and graves. The thefts began a century ago – thousands of items taken – and they continue today. . . . One leading museum director calls it “cultural strip-mining”. . .. The Hopis [Hopit] are having their religion carried away. . . .

The theft of three of the four pieces of a sacred construction known as the “talatumsi,” or Dawn Woman, has had by far the most devastating effect on the Hopi. An irreplaceable part of the tribe’s manhood-initiation ceremony, the “talatumsi” has been missing from its shrine in Shungopavi village since 1978. As a result, no Hopi boys have been initiated in a dozen years. . . .

[U]ntil the “talatumsi” is returned, an entire generation of men is being passed by. The most drastic scenario – but one that is entirely plausible – would mean the end of Hopi ceremonial culture, nothing less than the death of an ancient civilization. . . .

“We just don’t reproduce these objects,” said Leigh Jenkins, the tribe’s cultural preservation director. “When they’re stolen and sold, you affect the life-ways of the Hopi. The Hopi religion is not for sale.”

But it IS for sale, in a vigorous international black market for antiquities. A Hopi mask of buckskin, gourds and eagle feathers made 150 years ago can bring as much as $100,000 in the underground art markets of Santa Fe, New York, Berlin and Tokyo. . . .

“Dealers aren’t going into the villages and stealing this stuff,” said Jordan Davis, co-owner of the Morningstar Gallery in Santa Fe, N.M. The Hopis themselves are stealing it – “9 1/2 times out of 10 it’s the Indians.”

Hopi tribal officials admit privately that alcoholic, drug-addicted or impoverished Hopis are the likely culprits in the thefts of profound pieces from private places.

The article does a decent job, but it also leaves out some important facts. It was three Talaotumsim (Dawn Women) that were stolen, not a single “talatumsi.”An even better spelling is Taa’lao’tumsim, and we also know these beings as our Naa’si’wam (Sisters). The really tragic thing is that the story ends with the destruction of the Talaotumsim, to destroy the evidence when the cops were moving in. It’s a horrifying story of greed and violence.

JRW: Did the theft of Talaotumsim affect you personally?

BHN: Yes, it did. I am now considered an “elder,” but when I was a young man, I could not go through the rituals to reach traditional adulthood as a Hopi. When the Talaotumsim were stolen, sold, then destroyed, it prevented me and many other young Hopit from participating in the ceremony, Wuui’tsim, to become full adult members of our tribe. We cannot be treated as “complete men” in this life and our afterlives. We cannot, as Leigh (Jenkins) Kuwanwisiwma noted in the quotation, simply recreate the objects and associated rituals. This theft affected me and other younger men forever. I cannot participate in certain sacred ceremonies because I have not been “ordained” as an adult Hopi. This is especially important to me personally because I am Bear Clan with tremendous responsibility to our people.

Prayers are ongoing, but the theft of the Talaotumsim may have ended an initiation ceremony vitally important to the Second Mesa Hopit and thus to all of Creation. No one was held accountable for this tragedy, not even our people who helped these thieves steal something that is so sacred for our people. But we believe, in our way, that the spirits above punished them by taking their lives prematurely.

JRW: What makes it possible for ARC to continue at Hopi and on other tribes’ lands?

BHN: The primary perpetrators – the “demand” side of the equation – are non-Hopi looters who want to sell artifacts in the black market to collectors. Sadly, however, the looters don’t do this alone, although they have sophisticated equipment to locate buried artifacts.

Looters also need local help with the “supply” side. A lot of ARC involves conspiracies between Natives and non-Natives. It’s typically the non-Natives who encourage our people to see Hopi culture and spirituality as a commodity. That’s not a Hopi way of thinking.

Looters, thieves, tend to become friendly with our people, to develop some trust, and to then talk our people into showing them where sites are located or artifacts are stored. The looters prey on people hungry for money, alcohol, or drugs. To fix that you have to rebuild social connections and community health, the same things being damaged by the loss of cultural items and trust within Hopi.

I have noticed that this activity has subsided somewhat in the last few years, perhaps because of the attention recently in the sale or auctioning of our Katsinum in France. But that is not to say that it stopped. It still continues. Quatsi is what we call them or “friends”, not simply “masks,” as they are living spirits, Katsinum, that come to provide their blessings to the earth and people.

One of the reasons that the thefts continue is that few looters are caught and even fewer are fined or imprisoned. Laws are too vague when it comes to ARC. Our own tribe does not have the tribal (or federal) authority and jurisdiction to bring these perpetrators to justice. I don’t know or recall if any of our own people have ever been jailed, or even faced any penalties. This point brings out a void, in my opinion, in federal laws that do not specifically address ARC, much less tribes having their own laws with the powers to exercise those laws.

However, Hopit believe while there may not be any federal criminal charges filed on our people, there are social, religious, and spiritual consequences. Those we believe were involved in the loss of the Talaotumsim passed away prematurely.

JRW: What do you recommend to eliminate ARC from Indian Country? Who? When? How?

BHN: Tribes, and particularly my tribe, Hopi, have not done a good job of addressing this matter. We need to develop stronger laws and codes that we, as sovereign nations, can use to charge anyone, especially including tribal members responsible for these crimes. “But it takes more than just laws.  It requires us teaching our young of the importance of our beliefs and culture, and the important roles they all have in our lifeways and the world at large.

We also need to coordinate our tribal laws with Federal law to establish equal force and effect (concurrent jurisdiction) in tribal, state, Federal, and international courts. We need the rules and the consequences to be the same for outside thieves, looters, and tribal members. We should be able to stop the auction of our sacred artifacts in international markets.

We also need a specific federal law to categorically forbid the export of sacred objects and archaeological resources and to enable the repatriation of these materials when located internationally. The bipartisan Safeguard Tribal Objects of Patrimony Act, sponsored by Representative Deb Haaland and other fine leaders, will do this and requires our unified support.

Finally, the profession of archaeology must understand and respect the customs and practices of our Native people, especially when it comes to “cultural ownership.” Funerary objects, for example, must belong only to those who have passed on. Archaeologists have no right to dig up graves without the permission of the next of kin or to separate the human remains from their funerary objects. Hopi believe that an individual’s spirit “goes back home” to the spirit world, but this travel is interrupted when professionals remove them and their funerary objects to take them to a laboratory for study. Archaeologists were too often responsible for taking these people and objects from their resting places and must now shoulder responsibilities for returning them so their journey can continue. We bury our people into the womb of our mother, the Earth, just as they were developed in their mothers. I ask, if Hopit were to dig up the graves and remains of non-Native ancestors under the guise of further study, or to sell family or church artifacts for a profit, would non-Natives allow this to go on?

Thank you for this opportunity to share with you what happened to our people, Hopi Sinom, because of ARC. Pai’lolmani.